"Unified in Friendship and Harmony" 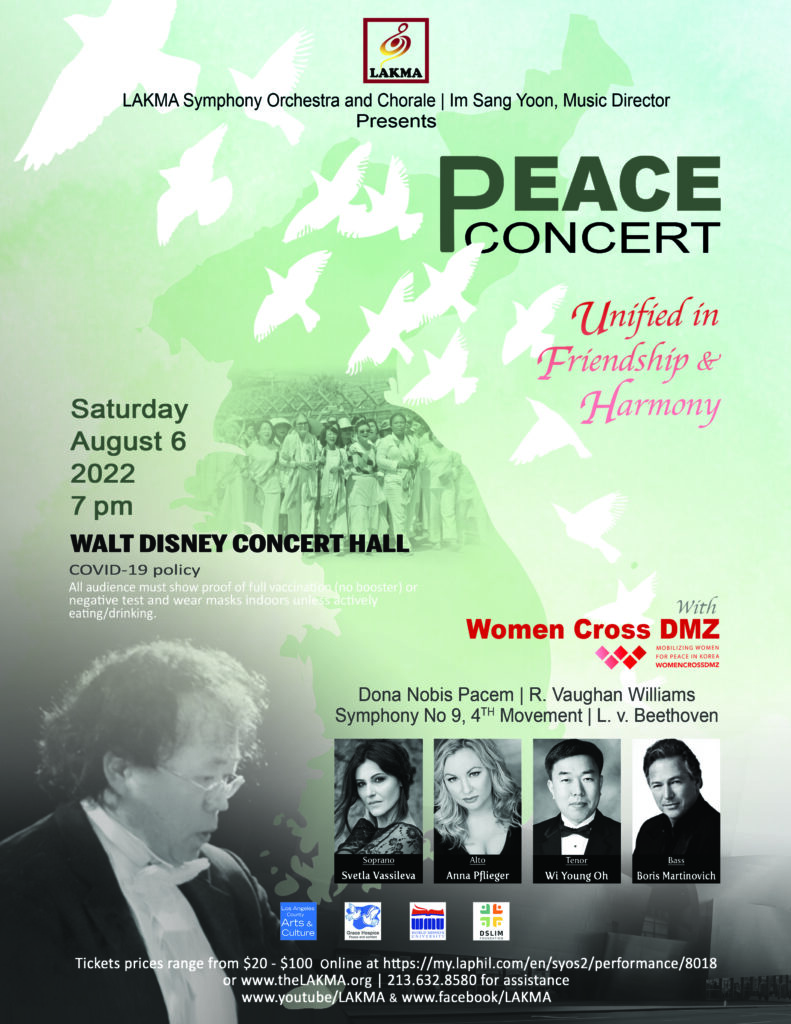 LAKMA extends a warm invitation to join us for our upcoming concert “Peace Concert: Unified in Friendship and Harmony” at the Walt Disney Concert Hall on August 6.

The concert will feature performances by LAKMA Symphony Orchestra and Chorale, as well as a screening of exclusive clips from the new documentary Crossings by Emmy award-winning filmmaker Deann Borshay Liem (Geographies of Kinship, Memory of Forgotten War). The event will benefit Women Cross DMZ (WCDMZ), a women-led organization that advocates for peace on the Korean Peninsula, the reunion of divided families, and women’s inclusion in the peace process.

Peace on the Korean Peninsula holds special resonance for LAKMA. The Korean War is the United States’ longest war. Although the 1953 armistice agreement ceased hostilities, it has never been replaced with a formal peace treaty. The Peninsula remains divided by the 2.5-mile-wide and 155-mile-long “Demilitarized Zone,” which is often called “the most militarized border in the world.” The recurring military tensions at the DMZ serve as a sobering reminder of the possibility of renewed fighting. One of the tragedies of the ongoing conflict is that countless Korean families continue to be separated from their loved ones for over half a century.

LAKMA believes that music has the power to uplift communities and transform mindsets. Our mission is: “We are people helping people through music.” In the face of despair, we turn to music to remind us of our spirit and purpose. We hope that this evening will be a time for communities to come together and renew efforts to achieve peace on the Korean peninsula.

The program will include Dona Nobis Pacem, performances by acclaimed soloists Svetla Vassileva and Boris Martinovich, as well as a screening of exclusive clips from the new documentary Crossings by Emmy award-winning filmmaker Deann Borshay Liem (Geographies of Kinship, Memory of Forgotten War). The film is about women’s peacebuilding efforts to end the Korean War. You can watch the trailer here.

This concert has a particularly timely and urgent message for peace, as tensions continue to rise on the Korean Peninsula. Proceeds from ticket sales and donations will go to WCDMZ in support of their peace-building efforts. Please join us for this special event.